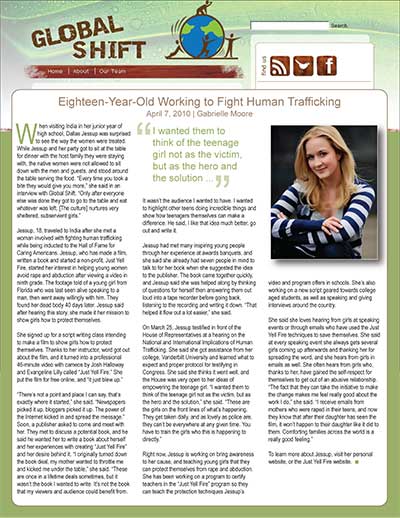 When visiting India in her junior year of high school, Dallas Jessup was surprised to see the way the women were treated. While Jessup and her party got to sit at the table for dinner with the host family they were staying with, the native women were not allowed to sit down with the men and guests, and stood around the table serving the food. “Every time you took a bite they would give you more,” she said in an interview with Global Shift. “Only after everyone else was done they got to go to the table and eat whatever was left. [The culture] nurtures very sheltered, subservient girls.”

Jessup, 18, traveled to India after she met a woman involved with fighting human trafficking while being inducted to the Hall of Fame for Caring Americans. Jessup, who has made a film, written a book and started a non-profit, Just Yell Fire, started her interest in helping young women avoid rape and abduction after viewing a video in ninth grade. The footage told of a young girl from Florida who was last seen alive speaking to a man, then went away willingly with him. They found her dead body 40 days later. Jessep said after hearing this story, she made it her mission to show girls how to protect themselves.

She signed up for a script writing class intending to make a film to show girls how to protect themselves. Thanks to her instructor, word got out about the film, and it turned into a professional 46-minute video with cameos by Josh Halloway and Evangeline Lilly called “Just Yell Fire.” She put the film for free online, and “it just blew up.”

“There’s not a point and place I can say, that’s exactly where it started,” she said. “Newspapers picked it up, bloggers picked it up. The power of the Internet kicked in and spread the message.” Soon, a publisher asked to come and meet with her. They met to discuss a potential book, and he said he wanted her to write a book about herself and her experiences with creating “Just Yell Fire” and her desire behind it. “I originally turned down the book deal, my mother wanted to throttle me and kicked me under the table,” she said. “These are once in a lifetime deals sometimes, but it wasn’t the book I wanted to write. It’s not the book that my viewers and audience could benefit from. It wasn’t the audience I wanted to have. I wanted to highlight other teens doing incredible things and show how teenagers themselves can make a difference. He said, I like that idea much better, go out and write it.

Jessup had met many inspiring young people through her experience at awards banquets, and she said she already had seven people in mind to talk to for her book when she suggested the idea to the publisher. The book came together quickly, and Jessup said she was helped along by thinking of questions for herself then answering them out loud into a tape recorder before going back, listening to the recording and writing it down. “That helped it flow out a lot easier,” she said.

On March 25, Jessup testified in front of the House of Representatives at a hearing on the National and International Implications of Human Trafficking. She said she got assistance from her college, Vanderbilt University and learned what to expect and proper protocol for testifying in Congress. She said she thinks it went well, and the House was very open to her ideas of empowering the teenage girl. “I wanted them to think of the teenage girl not as the victim, but as the hero and the solution,” she said. “These are the girls on the front lines of what’s happening. They get taken daily, and as lovely as police are, they can’t be everywhere at any given time. You have to train the girls who this is happening to directly.”

Right now, Jessup is working on bring awareness to her cause, and teaching young girls that they can protect themselves from rape and abduction. She has been working on a program to certify teachers in the “Just Yell Fire” program so they can teach the protection techniques Jessup’s video and program offers in schools. She’s also working on a new script geared towards college aged students, as well as speaking and giving interviews around the country.

She said she loves hearing from girls at speaking events or through emails who have used the Just Yell Fire techniques to save themselves. She said at every speaking event she always gets several girls coming up afterwards and thanking her for spreading the word, and she hears from girls in emails as well. She often hears from girls who, thanks to her, have gained the self-respect for themselves to get out of an abusive relationship. “The fact that they can take the initiative to make the change makes me feel really good about the work I do,” she said. “I receive emails from mothers who were raped in their teens, and now they know that after their daughter has seen the film, it won’t happen to their daughter like it did to them. Comforting families across the world is a really good feeling.”