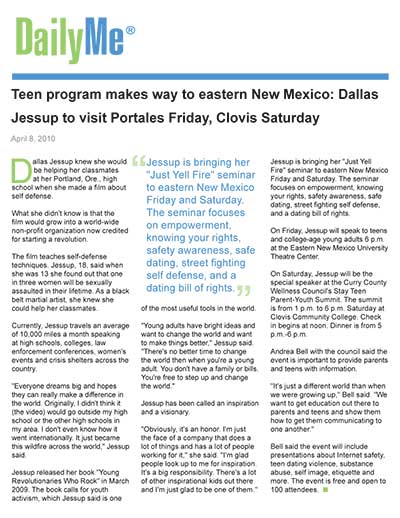 Apr. 8--Dallas Jessup knew she would be helping her classmates at her Portland, Ore., high school when she made a film about self defense.

What she didn't know is that the film would grow into a world-wide non-profit organization now credited for starting a revolution.

The film teaches self-defense techniques. Jessup, 18, said when she was 13 she found out that one in three women will be sexually assaulted in their lifetime. As a black belt martial artist, she knew she could help her classmates.

"Everyone dreams big and hopes they can really make a difference in the world. Originally, I didn't think it (the video) would go outside my high school or the other high schools in my area. I don't even know how it went internationally. It just became this wildfire across the world," Jessup said.

Jessup released her book "Young Revolutionaries Who Rock" in March 2009. The book calls for youth activism, which Jessup said is one of the most useful tools in the world.

Jessup has been called an inspiration and a visionary.

"Obviously, it's an honor. I'm just the face of a company that does a lot of things and has a lot of people working for it," she said. "I'm glad people look up to me for inspiration. It's a big responsibility. There's a lot of other inspirational kids out there and I'm just glad to be one of them."

On Friday, Jessup will speak to teens and college-age young adults 6 p.m. at the Eastern New Mexico University Theatre Center.

On Saturday, Jessup will be the special speaker at the Curry County Wellness Council's Stay Teen Parent-Youth Summit. The summit is from 1 p.m. to 6 p.m. Saturday at Clovis Community College. Check in begins at noon. Dinner is from 5 p.m.-6 p.m.

Andrea Bell with the council said the event is important to provide parents and teens with information.

"It's just a different world than when we were growing up," Bell said. "We want to get education out there to parents and teens and show them how to get them communicating to one another."

Bell said the event will include presentations about Internet safety, teen dating violence, substance abuse, self image, etiquette and more. The event is free and open to 100 attendees.