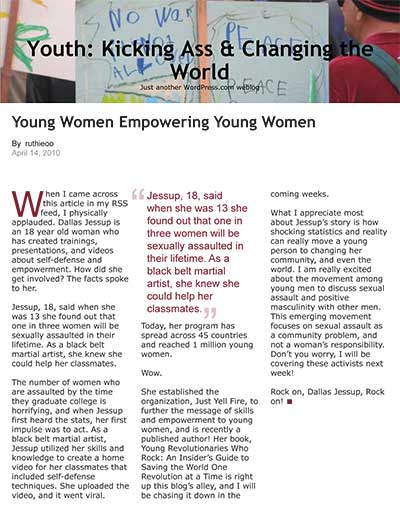 When I came across this article in my RSS feed, I physically applauded. Dallas Jessup is an 18 year old woman who has created trainings, presentations, and videos about self-defense and empowerment. How did she get involved? The facts spoke to her.

Jessup, 18, said when she was 13 she found out that one in three women will be sexually assaulted in their lifetime. As a black belt martial artist, she knew she could help her classmates.

The number of women who are assaulted by the time they graduate college is horrifying, and when Jessup first heard the stats, her first impulse was to act. As a black belt martial artist, Jessup utilized her skills and knowledge to create a home video for her classmates that included self-defense techniques. She uploaded the video, and it went viral. Today, her program has spread across 45 countries and reached 1 million young women.

She established the organization, Just Yell Fire, to further the message of skills and empowerment to young women, and is recently a published author! Her book, Young Revolutionaries Who Rock: An Insider’s Guide to Saving the World One Revolution at a Time is right up this blog’s alley, and I will be chasing it down in the coming weeks.

What I appreciate most about Jessup’s story is how shocking statistics and reality can really move a young person to changing her community, and even the world. I am really excited about the movement among young men to discuss sexual assault and positive masculinity with other men. This emerging movement focuses on sexual assault as a community problem, and not a woman’s responsibility. Don’t you worry, I will be covering these activists next week!

Rock on, Dallas Jessup, Rock on!