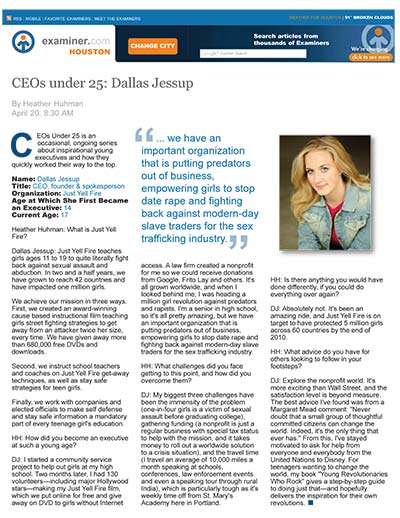 CEOs Under 25 is an occasional, ongoing series about inspirational young executives and how they quickly worked their way to the top.

Dallas Jessup: Just Yell Fire teaches girls ages 11 to 19 to quite literally fight back against sexual assault and abduction. In two and a half years, we have grown to reach 42 countries and have impacted one million girls.

We achieve our mission in three ways. First, we created an award-winning cause based instructional film teaching girls street fighting strategies to get away from an attacker twice her size, every time. We have given away more than 680,000 free DVDs and downloads.

Finally, we work with companies and elected officials to make self defense and stay safe information a mandatory part of every teenage girl's education.

HH: How did you become an executive at such a young age?

DJ: I started a community service project to help out girls at my high school. Two months later, I had 130 volunteers—including major Hollywood stars—making my Just Yell Fire film, which we put online for free and give away on DVD to girls without Internet access. A law firm created a nonprofit for me so we could receive donations from Google, Frito Lay and others. It's all grown worldwide, and when I looked behind me, I was heading a million girl revolution against predators and rapists. I'm a senior in high school, so it's all pretty amazing, but we have an important organization that is putting predators out of business, empowering girls to stop date rape and fighting back against modern-day slave traders for the sex trafficking industry.

HH: What challenges did you face getting to this point, and how did you overcome them?

DJ: My biggest three challenges have been the immensity of the problem (one-in-four girls is a victim of sexual assault before graduating college), gathering funding (a nonprofit is just a regular business with special tax status to help with the mission, and it takes money to roll out a worldwide solution to a crisis situation), and the travel time (I travel an average of 10,000 miles a month speaking at schools, conferences, law enforcement events and even a speaking tour through rural India), which is particularly tough as it's weekly time off from St. Mary's Academy here in Portland.

HH: Is there anything you would have done differently, if you could do everything over again?

DJ: Absolutely not. It's been an amazing ride, and Just Yell Fire is on target to have protected 5 million girls across 60 countries by the end of 2010.

HH: What advice do you have for others looking to follow in your footsteps?

DJ: Explore the nonprofit world. It's more exciting than Wall Street, and the satisfaction level is beyond measure. The best advice I've found was from a Margaret Mead comment: "Never doubt that a small group of thoughtful committed citizens can change the world. Indeed, it's the only thing that ever has." From this, I've stayed motivated to ask for help from everyone and everybody from the United Nations to Disney. For teenagers wanting to change the world, my book "Young Revolutionaries Who Rock" gives a step-by-step guide to doing just that—and hopefully delivers the inspiration for their own revolutions.