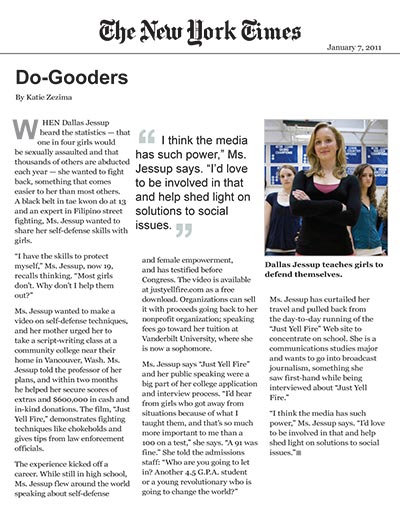 WHEN Dallas Jessup heard the statistics – that one in four girls would be sexually assaulted and that thousands of others are abducted each year – she wanted to fight back, something that comes easier to her than most others. A black belt in tae kwon do at 13 and an expert in Filipino street fighting, Ms. Jessup wanted to share her self-defense skills with girls.

“I have the skills to protect myself,” Ms. Jessup, now 19, recalls thinking. “Most girls don’t. Why don’t I help them out?”

Ms. Jessup wanted to make a video on self-defense techniques, and her mother urged her to take a script-writing class at a community college near their home in Vancouver, Wash. Ms. Jessup told the professor of her plans, and within two months he helped her secure scores of extras and $600,000 in cash and in-kind donations. The film, “Just Yell Fire,” demonstrates fighting techniques like chokeholds and gives tips from law enforcement officials.

The experience kicked off a career. While still in high school, Ms. Jessup flew around the world speaking about self-defense and female empowerment, and has testified before Congress. The video is available at justyellfire.com as a free download. Organizations can sell it with proceeds going back to her nonprofit organization; speaking fees go toward her tuition at Vanderbilt University, where she is now a sophomore.

Ms. Jessup says “Just Yell Fire” and her public speaking were a big part of her college application and interview process. “I’d hear from girls who got away from situations because of what I taught them, and that’s so much more important to me than a 100 on a test,” she says. “A 91 was fine.” She told the admissions staff: “Who are you going to let in? Another 4.5 G.P.A. student or a young revolutionary who is going to change the world?”

Ms. Jessup has curtailed her travel and pulled back from the day-to-day running of the “Just Yell Fire” Web site to concentrate on school. She is a communications studies major and wants to go into broadcast journalism, something she saw first-hand while being interviewed about “Just Yell Fire.”

“I think the media has such power,” Ms. Jessup says. “I’d love to be involved in that and help shed light on solutions to social issues.”