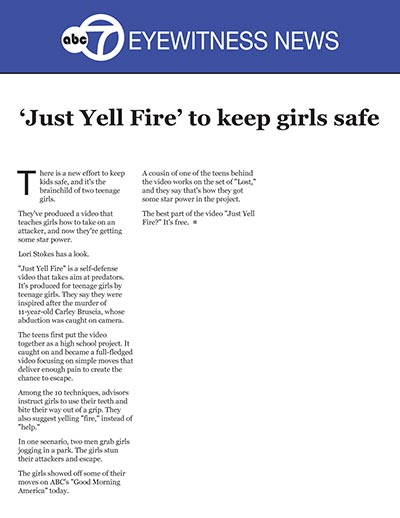 There is a new effort to keep kids safe, and it's the brainchild of two teenage girls.

They've produced a video that teaches girls how to take on an attacker, and now they're getting some star power.

Lori Stokes has a look.

"Just Yell Fire" is a self-defense video that takes aim at predators. It's produced for teenage girls by teenage girls. They say they were inspired after the murder of 11-year-old Carley Bruscia, whose abduction was caught on camera.

The teens first put the video together as a high school project. It caught on and became a full-fledged video focusing on simple moves that deliver enough pain to create the chance to escape.

Among the 10 techniques, advisors instruct girls to use their teeth and bite their way out of a grip. They also suggest yelling "fire," instead of "help."

In one scenario, two men grab girls jogging in a park. The girls stun their attackers and escape.

The girls showed off some of their moves on ABC's "Good Morning America" today.

A cousin of one of the teens behind the video works on the set of "Lost," and they say that's how they got some star power in the project.

The best part of the video "Just Yell Fire?" It's free.